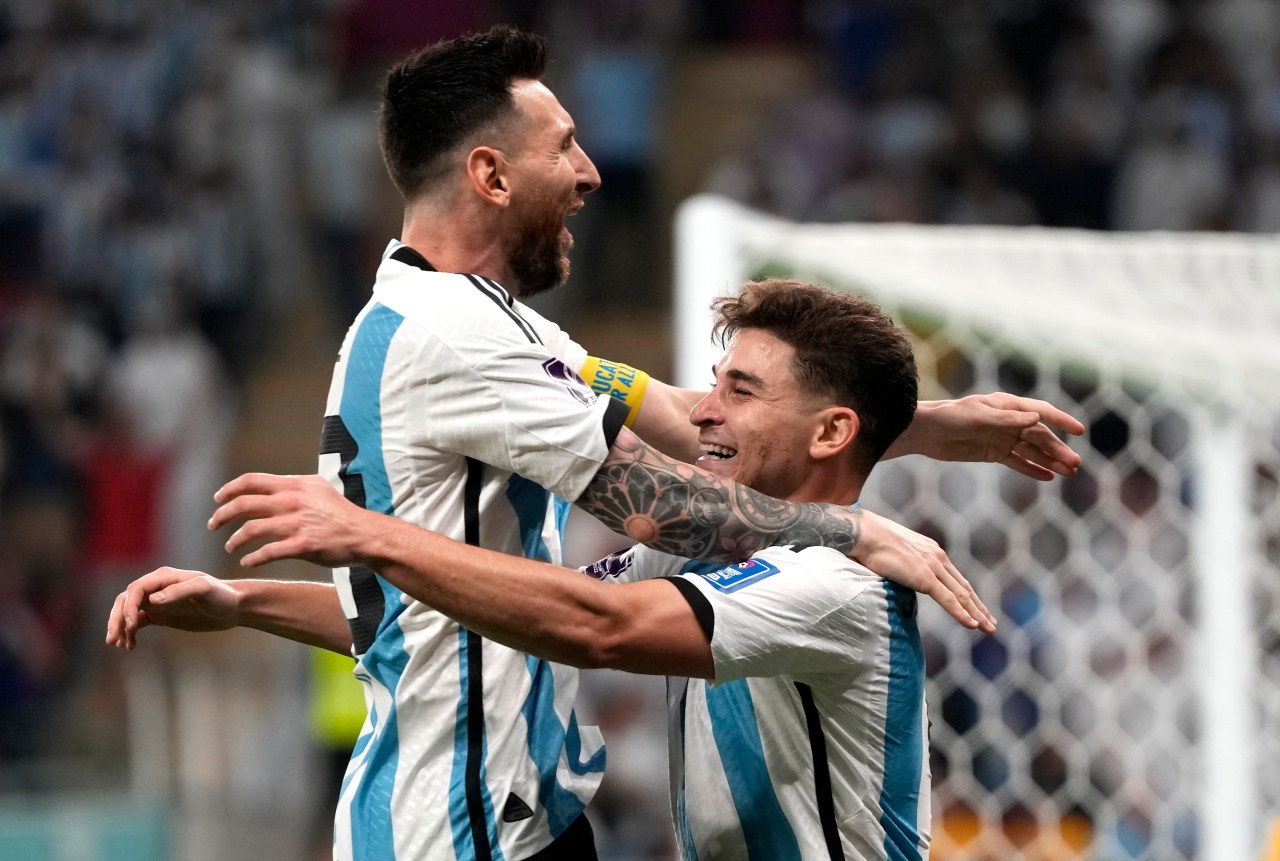 DOHA, Qatar (AP) — This season has been a real education for Julián Álvarez.

From deputizing for Erling Haaland in his first year at Manchester City to assisting Lionel Messi for Argentina at the World Cup, Álvarez is learning from football’s biggest stars.

He is on his way to becoming one himself.

Two starts, two goals. How about that for your first World Cup?

As someone who once scored six goals in a single match in the Copa Libertadores, 22-year-old Álvarez seems born to play on the big stage.

At the World Cup, he’s living his dream: playing alongside Messi — one of the game’s all-time greats — in front of fans who make more noise than any other traveling contingent in Qatar.

“Great joy,” Álvarez said after Argentina’s 2-1 win over Australia in the round of 16 on Saturday.

“I always try to do my best to help wherever I play. I cheer on my teammates on the field or on the bench. We will go this way to continue to make Argentines happy.”

Álvarez profited from fellow striker Lautaro Martínez’s failure to establish himself as Argentina’s starting centre-forward. The difference in form between the two players was all too apparent against Australia.

While Martinez missed two great chances late in the game after coming on as a substitute, Álvarez – the man he replaced – scored on his only real chance. The goal summed up the type of player he is and why he is already so highly regarded by Argentina’s passionate fans.

Coupled with his lethal finishing was a relentless work ethic that was on display when Álvarez closed down Mathew Ryan as the Australian keeper held the ball inside his own area. Also under pressure from Argentina’s Rodrigo De Paulo, Ryan took a second touch that was too heavy and Álvarez latched onto him to dispossess the ball and shoot on the turn into an unguarded net.

The goal couldn’t have been more different from his first of the World Cup, a long-range shot into the top corner at the end of a sweeping 25-pass move.

Tap-ins, curlers, link-up play, intense pressing. No wonder City manager Pep Guardiola rates Álvarez highly enough to make him Haaland’s second striker in his team, to the extent that Guardiola was happy to offload Gabriel Jesus and Raheem Sterling during the last off-season.

Álvarez and Jesus are similar in that they never give defenders a second to rest. What is different about them is their ability to score goals and Álvarez seems a much more natural player.

As for Martinez, he seems to have completely lost his composure in front of goal. A wasteful finish over the bar in stoppage time, after Messi put it in, kept Australia alive in a thrilling game at the Ahmad Bin Ali Stadium that had a dramatic finish when Argentina goalkeeper Emi Martinez saved almost the last shot of the game. the game.

Had it gone in, Lautaro Martinez might have been hesitant. He was the subject of much chatter among Argentina fans on social media and on the metro back in Doha after the match, none of it flattering.

Argentina coach Lionel Scaloni did not address the critics.

“Lautaro has helped us many times, so I wouldn’t want to go into details about that,” Scaloni said. “That would be unfair to Lautaro. He will continue to help us and make us happy.”

Indeed, Martinez has been Scaloni’s go-to striker since the coach took over after the 2018 World Cup initially on an interim basis. Martinez has scored 21 goals in that time, more than anyone other than Messi.

Now, he is firmly behind Álvarez in the pecking order.

Álvarez arrived at the World Cup on a high after making a string of starts for City, the first since joining from River Plate in July due to an injury to Haaland.

Now he leads the line for Argentina in its bid for a third World Cup title and to seal Messi’s legacy in front of fans who push the team all the way.

“We will always do our best and support him (Messi) to continue on this path,” Álvarez said.

“We feel at home here,” he added. “In all the stadiums we played in, most of the people were from Argentina. You can feel their breath and how they sing for the whole 90 minutes.”

Steve Douglas is at https://twitter.com/sdouglas80