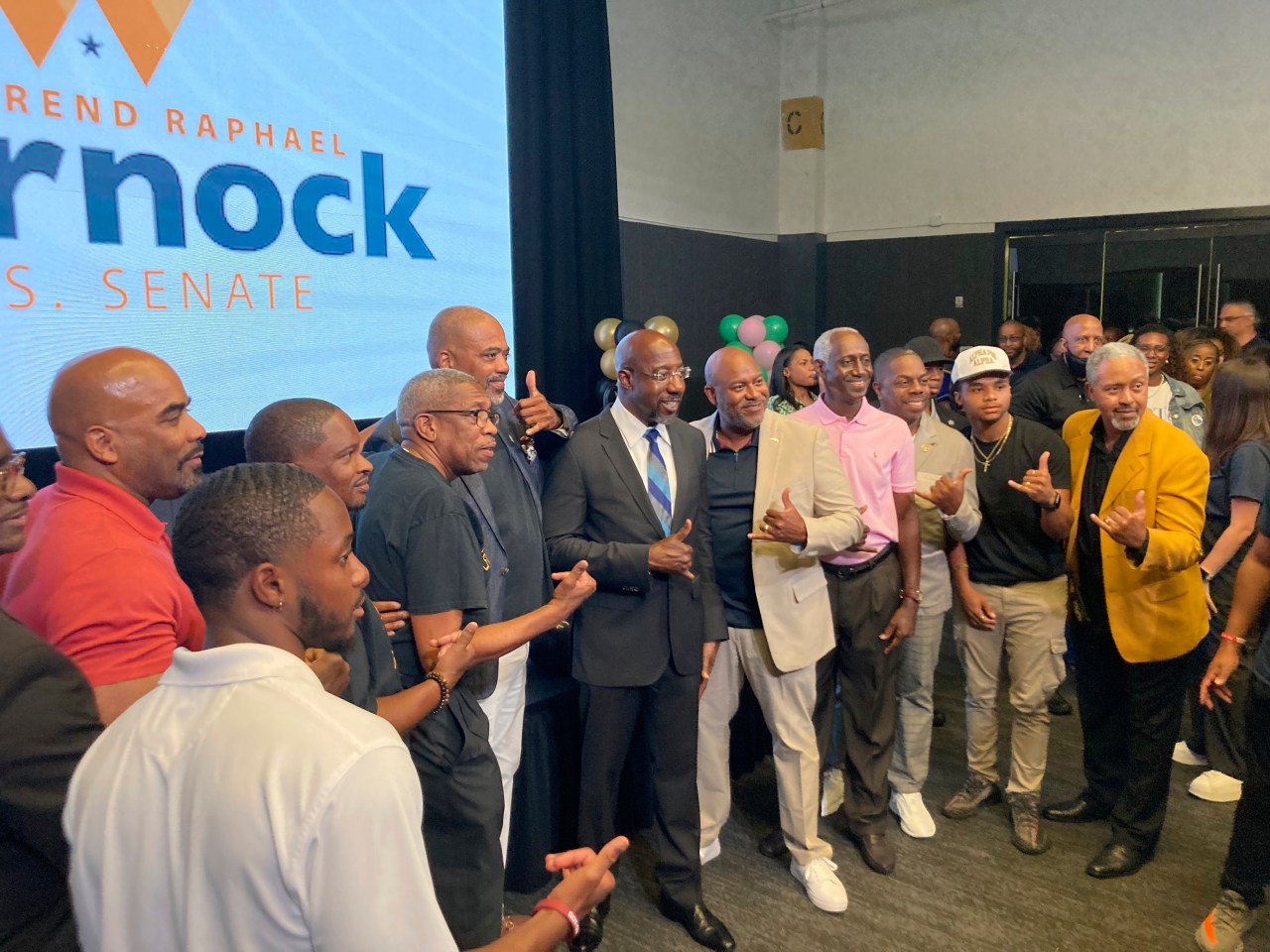 SMYRNA, Ga. (AP) – The front desk of a metro Atlanta office suite is a veritable museum of Herschel Walker’s football accomplishments for the University of Georgia Bulldogs and the NFL. The office is part of the Atlanta Braves real estate development in the new suburban home of the Major League Baseball franchise.

This seat of Georgia’s Republican candidate for the US Senate is, of course, not officially about athletics. Still, the location and decor help showcase the many pro sports and college loyalties that explain the political divide in this battleground state, where Walker is trying to unseat Democratic Sen. Raphael Warnock in Tuesday’s runoff election.

“Sports is a cultural identifier, and in the South, college fandom is a big part of that,” said David Mowery, a University of Georgia alumnus, avid Bulldog supporter and now an Alabama political consultant who works with Republicans and Democrats. “Now our politics and campaigns are so much about identity,” Mowery said. “We see all these overlaps.”

Sports and politics have long crossed paths in America. But flashpoints — the racial segregation of college campuses and professional leagues, the use of Native American mascots and images, civil rights protests by athletes, power struggles over taxpayer funding for stadiums — are ever-present in Georgia.

For Republicans, whose coalition is older, whiter and less urban than the general population, that means an open embrace of the Bulldogs and the baseball Braves, each with fan bases that are whiter and more suburban and rural. And it’s not just Walker, who led the Bulldogs to a national championship in 1980 and won the Heisman Trophy two years later.

“Great politics, great place to campaign,” said Gov. Brian Kemp, a UGA alumnus, as he mingled with fans in Athens ahead of the Georgia game earlier this season.

The governor grew up in Athens and is close to the family of the late Bulldogs coach Vince Dooley. His wife, Marty, was a Georgia cheerleader in her college days, he reminded reporters as he reviewed the Bulldogs’ prospects for 2022. The defending national champion, he said, “have the players” but “have to stay humble.” (They won the Southeastern Conference championship on Saturday.)

Kemp and elected second lieutenant. Burt Jones, who also played for Georgia, joined Walker in using red and black as campaign colors. Attorney General Chris Carr, who won a second term in November, sometimes calls himself a “Double Dawg” — an honor for someone with two UGA degrees.

Meanwhile, the Democratic coalition is anchored by metropolitan areas and non-whites, who now make up about 4 in 10 voters in Georgia. So when politicians like Warnock bring sports into their campaigns, it’s to stop by an Atlanta sports bar during a recent World Cup soccer match between the USA and Iran.

Warnock will campaign on Sunday in Athens. But on Saturday, when Walker was at the SEC Championship Game, Warnock was at Augusta. The senator visited his alma mater, historically black Morehouse College, this fall for Homecoming weekend, but notes, with a mix of seriousness and humor, a different focus and scale.

“You know what it’s like if you go … to an HBCU football game,” Warnock said at the HBCU fraternities and sororities campaign. “It’s not just a game, it’s a fashion show and a Battle of the Bands.”

Jason Carter, the 2014 Democratic candidate for governor, explained Georgia’s politics by pointing to Atlanta’s pro football team and its demographically diverse fans. “Stacey needs the vote of Atlanta United,” he would say of Stacey Abrams, who lost to Kemp in 2018 and 2022.

Certainly, there are white football fans in the Republican suburbs and Democrats, white and black, who love the Bulldogs and the Braves. One of Warnock’s top aides organized “Dawgs for Abrams” as a UGA student in 2018. Still, the partisan divide in campaign styles is tied to race and geography, even if it’s not explicit.

When Walker and Kemp chose campaign offices near each other in the Braves’ Cobb County development, Republicans described the simple decision to be near metro Atlanta’s north suburbs as critical to their winning coalition. The Braves themselves made the same calculation, leaving town in 2017 after a half-century and justifying the surprise move by saying they would be closer to the majority of their season-ticket holders. (Cobb County politicians also gave the team $400 million in stadium financing, something Atlanta Mayor Kasim Reed refused to do. Instead, Reed directed city money to renovate the downtown arena for the NBA Hawks.)

Perhaps most notably, Republicans’ embrace of the Braves comes amid controversy over Native American imagery in sports and a separate political firestorm over the 2021 Republican overhaul of Georgia’s election laws.

Democrats, including Warnock, called the law “Jim Crow 2.0,” arguing that it made it harder for some black voters to vote. Georgia-based Delta and Coca-Cola corporations criticized the law. The Braves stayed out of contention. But baseball commissioner Rob Manfred responded by moving the 2021 All-Star Game out of Cobb County. Kemp relentlessly blamed the Democrats, although Warnock and Abrams did not call for change.

The two Democrats also stopped short of saying the Braves should change their name or abandon the fans’ “Tomahawk Chop” at home games, but others, including the Biden White House, say changes should be on the table.

“He needs to come out and say if he believes they should change the name. Well, I don’t,” Walker said in an appearance on Fox News. When Warnock largely ignored the question, Walker’s aide tweeted that the senator “must be a Mets fan.”

Still, it’s undoubtedly Walker’s football recognition that creates a unique bond between the black conservative and the multigenerational white political base.

“When I was in high school, Herschel Walker was the biggest name in town,” Republican National Committeewoman Ginger Howard said of the 1980 championship season. Now, she said, her young nephews excitedly say, “Ginger, you know Herschel!”

On Saturday, Zach Jacobs and Zach Adams, both 23-year-olds from the Atlanta suburb of Woodstock, waited near Mercedes Benz Stadium downtown to take pictures with Walker. Both voted for their football hero in the general election and said they would again on Tuesday.

“He’s a man of the people, he just connects to what Georgia is,” Jacobs said.

Walker has spoken at times about being among the first generation of black players at UGA, which was founded in 1785. Dooley, who supported Walker before the iconic coach died in October, first offered scholarships to black athletes in 1971. Walker was 8 .

Warnock, born in 1969, was not a star athlete and graduated from Morehouse, which opened its doors during post-Civil War reconstruction, a founding legacy that Warnock’s fellow HBCU alumni say is superseding athletics.

“We have a motto, a program: ‘A people without a voice is a people without hope,'” Marcus Montgomery said of the Alpha Phi Alpha fraternity he shares with the senator.

Adams, a white UGA graduate, acknowledged Warnock’s deep roots in Georgia. But pointing to the surrounding downtown Atlanta, he said, “Herschel is the man who can improve all of this and the rest of Georgia.”

Walker’s second election night celebration will be nearby in downtown Atlanta, just a few blocks from Warnock’s party. It’s a departure from Walker and Kemp’s Nov. 8 affair outside Braves Stadium. But the former star running back doesn’t necessarily break the mold. His place this time: the College Football Hall of Fame.