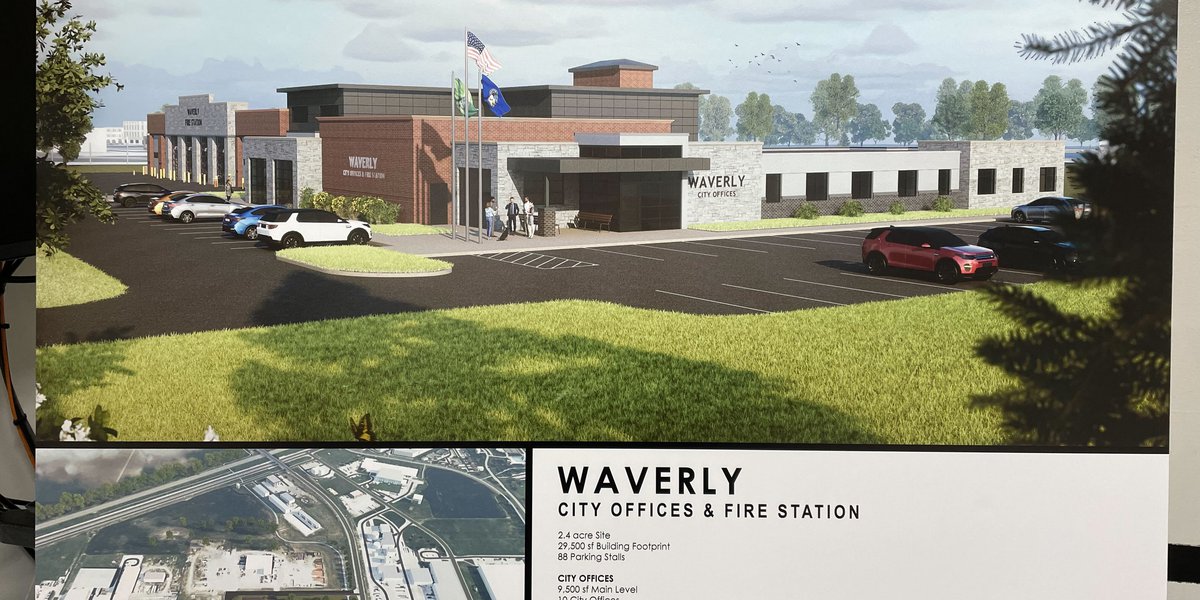 WAVERLY, Neb. (COLOGNE) – The city of Waverly and its volunteer fire department are ready to upgrade their current facility.

On Monday, Nov. 21, officials unveiled an early design concept for the new building, located directly across from Waverly High School near Amberley and Cannongate Roads. It will house both city and Waverly Volunteer Fire and Rescue offices.

Mayor Bill Gerdes tells 10/11 NOW one of the goals is to upgrade and expand both the city and the volunteer fire department. Waverly Fire will also be on site to assist with their response time.

“We made significant adjustments during this initial concept,” Gerdes said. “I think the floor plans we have now are probably as good as they get; So far everyone seems happy with them.”

Currently, both the city hall and the volunteer fire station are not only too small and limited, but they are also outdated and in need of significant upgrades. The city adds that it’s not really feasible to upgrade the buildings they’re in right now.

In addition, Gerdes says, the growth of the city is also a factor in the need for renewal.

“We’ve grown tremendously in the last ten years,” he said. “We’ve added a thousand to our population.”

As for the initial design concept, Rains says he’s very pleased with it.

“There are little things we want to fix,” he said. “It’s not really anything negative, it’s just little things that we have to think about if this plan goes forward.”

One of the biggest things Rains says he likes is the contrast between the proposed building and their current building.

“I hope the one thing that people look at and the one thing that excites me is the amount of space; the amount we can increase,” he said. “I don’t have to stick something outside so I can practice inside, and then tear it all apart and put it back inside. It just allows me to spread out and bring in proper training.”

As for what’s next, after Monday’s meeting and opening, the city says they’ll figure things out. Currently, the proposed structure has an estimated cost of about $11 million. Gerdes says ways to pay for the new building are still being discussed and worked out.

“We have a Waverly Fire Board to look into as well, because most of the vehicles that come into the fire station are owned by them,” he said.

Waverly Fire is unique in that it is one of the few combined urban-rural fire departments in the state. The city says they hope the fire board is willing to partner to make the project happen. Once funding is identified, designs go through a final round of engineering, followed by bidding and then construction.

For now, Raines says he’s happy to see a process that Gerdes says has been in the works for nearly 10 years finally moving forward.

“It’s a step,” said Rain. “The first step was talking about the station and now we’ve got the plans for the station and now people have met, so now we’re on to the next step; if that changes things or figure out how to come and pay for it; I’m just excited that we’ve gotten to this point and we’re going to keep going.”