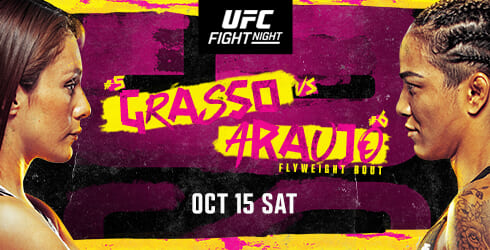 No UFC events tonight. After the action-packed UFC Vegas 61 card last Saturday, the MMA world leader is back with a Fight Night card, once again inside UFC Apex, and the event will be headlined by a clash of ranked flyweights.

The UFC will remain in Vegas for the fourth event in a row when the promotion once again puts on a show from their headquarters, UFC Apex, in Las Vegas on October 15th.

Headlining the card is Alexa Grasso vs. Viviana Araujuo, a top six women’s flyweight matchup. The fight is extremely important for both as a win could put them right in the middle of the title conversation.

Related: Get Paramount Plus today and watch live sports at an unbeatable price!

The event will feature the return of Octagon veterans Cub Swanson, Misha Cirkunov and Raphael Assuncao.

Related: UFC Predictions – We’re picking winners for several of the biggest fights on the next UFC card

On October 22, the UFC schedule returns to Abu Dhabi for UFC 280, a card packed with some of the best fighters in the world and two title bouts leading the way.

Headlining the night, after being stripped of his lightweight title due to missing weight earlier this year, Charles Oliveira will look to reclaim his vacant title in a highly anticipated bout with top contender Islam Makhachev. The co-main event will then see bantamweight champion Aljamain Sterling defend his title for the second consecutive time when he accepts the challenge of former two-time division king TJ Dillashaw.

On November 12, inside the “world’s most famous arena”, the UFC will offer a fall pay-per-view extravaganza headlined by two championship titles.

In the evening’s main event, UFC middleweight king Israel Adesanya looks to defend his title for the sixth straight time against a rival from his kickboxing past, Brazilian Alex Pereira. “Poatan” owns two kickboxing wins over Adesanya, including a knockout victory five years ago.

The UFC 281 co-main event will feature two-time strawweight queen Carla Esparza looking to retain her title in the first defense of her second championship reign. Her opponent will be former division champion Zhang Weili.

The New York card will also feature a dynamite lightweight scene between highly ranked fighters Dustin Poirier and Michael Chandler, as well as the return to the Octagon of Molly McCann, Karolina Kowalkiewicz and Dominick Reyes.