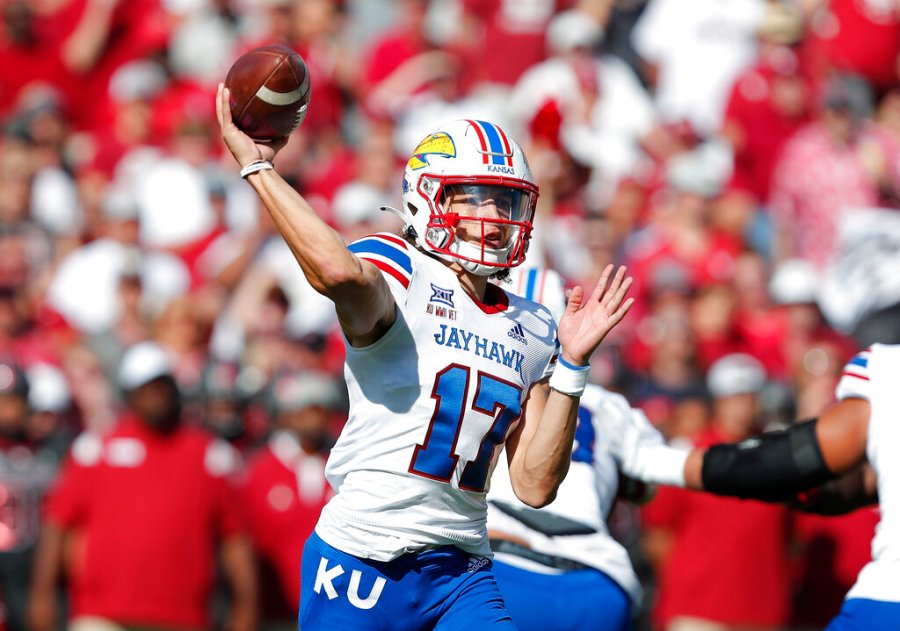 Oklahoma’s quarterback passed for 403 yards and two touchdowns in his first game back from a concussion, and the Sooners beat No. 19 Kansas 52-42 on Saturday to snap a three-game losing streak.

Gabriel was injured in the second quarter of Oklahoma’s loss to TCU on Oct. 1, and the team’s offense went nearly seven quarters without him starting the Kansas game. But a week after the Sooners were held to 195 yards against TexasOklahoma (4-3, 1-3 Big 12) exploded for 701 yards against the Jayhawks.

Gabriel was in the concussion protocol but passed tests during the week, clearing the way for him to play.

“I’m grateful for every opportunity I’ve been given because I know this game is aggressive,” he said.

Gabriel also ran 10 times for 37 yards and a touchdown, often sliding long before Kansas defenders had a chance to hit him.

“It’s football,” he said. “I’ll hit me. Just being smart. I’m trying to protect myself, but I’m also not taking any unnecessary hits.”

Kansas has been one of the nation’s favorites so far this season, surprising the pundits by winning five straight games to start the season and pushing TCU before losing 34-27 the previous week.

But Eric Gray ran for 176 yards, Marvin Mims had a career-high nine catches for 106 yards and Brayden Willis had five catches for a career-best 102 yards for the Sooners, who eased the pressure on first-year coach Brent Venables .

It was Oklahoma’s 18th straight win over Kansas, all by double digits. The Sooners haven’t lost to the Jayhawks since 1997.

“I like to see our guys in a winning formation at the end,” Venables said. “It was a good, hard fought win, we got off the mat and back in the saddle.”

Replacing the injured Jalon Daniels (shoulder), Jason Bean passed for 265 yards and four touchdowns for Kansas. Daniels was injured in the loss to TCU.

Gabriel completed 21 of 29 passes for 304 yards in the first half to help the Sooners take a 35-21 lead. The Sooners’ 487 first-half yards were the second-most in a half in school history, trailing only the 507 first-half rushing against Missouri in 1986.

“They came out and clicked on all cylinders,” Kansas coach Lance Leipold said. “They played very well, very aggressively. I think we were on our heels most of the day. It was like they were playing downhill.”

Gray had 124 yards rushing in the first half, surpassing his previous high as a Sooner before the break. The Sooners kept the Jayhawks at bay in the second half, controlling the ball for more than 17 minutes.

“In this situation, their backs were a little bit against the wall, and they came out and played extremely well,” Leipold said. “And we didn’t quite match it. And we have to find a way if we want to be that type of team, to be able to do that.”

Kansas: If not for three Oklahoma turnovers and a Jayhawks goal-line stop on the final play of the second quarter, the Sooners would have done even more damage.

Oklahoma: The Sooners have shown they can run the ball and chew up the clock if needed. They ran for 298 yards and had the advantage in time of possession for the first time this season.

IMPLICATIONS OF THE SURVEY

Although Oklahoma has the reputation and is favored, Kansas lost to an unranked team and could fall out of the Top 25.

Gautt starred on coach Bud Wilkinson’s teams from 1957 to 1959. He was a two-time All-Big Eight Conference selection and was an Academic All-American in 1958.

The uniform, designed by a group of school athletes, featured dark gray jerseys, pants and helmets with crimson trim and lettering. The word “TOGETHER” was stitched on the collar, the name tag on the back of the jersey had the word “UNITY” and on the sleeves an outline of the state of Oklahoma.

Kansas City cornerback Cobee Bryant left the game after injuring his left ankle in the final seconds of the first half.

Bryant left on a wheelchair to a standing ovation from the crowd. Leipold said it’s a “wait and see” situation.