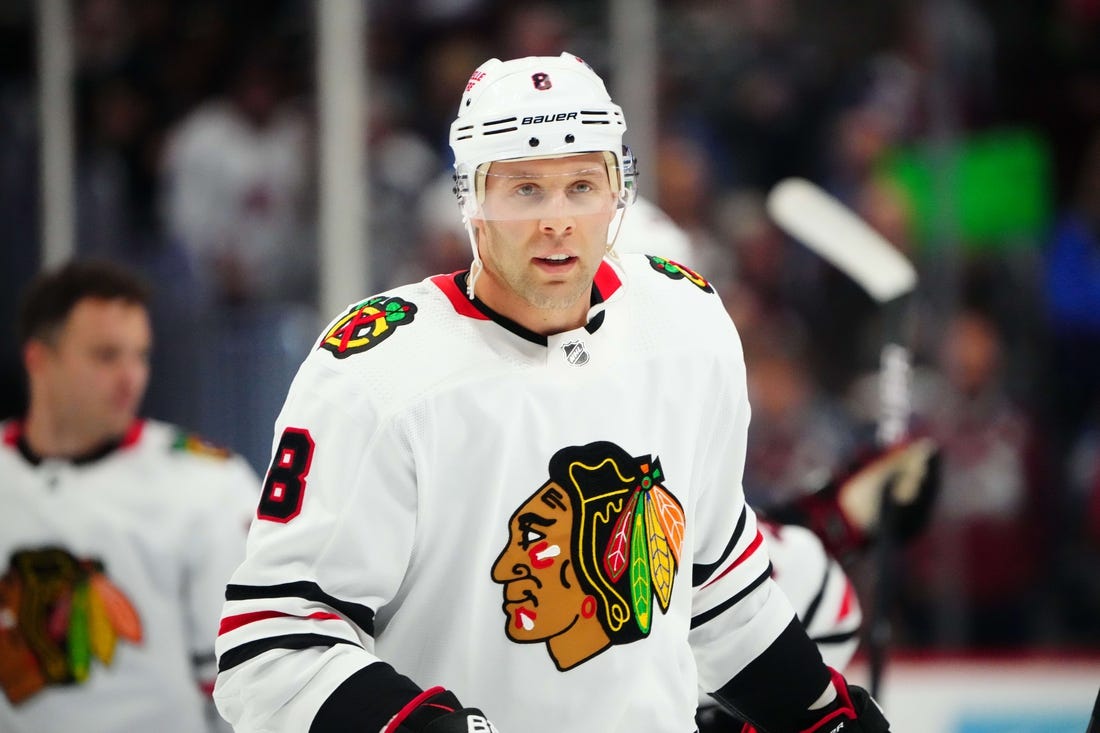 As the Chicago Blackhawks continued to head west to California, defenseman Jack Johnson finally found some normality before the puck dropped.

Johnson and the Blackhawks will play their third game this Saturday night when they take on the San Jose Sharks in the first of three Western Conference matchups this season.

There was nothing normal about Johnson’s return to Colorado on Wednesday night — unless opening the season for the Stanley Cup-winning club you left in July and participating in that team’s pregame celebration isn’t normal.

At an on-ice ceremony in Denver, Johnson posed for pictures with the Avalanche as they prepared to raise the organization’s third championship banner. His away white No. 8 Blackhawks jersey stood out alone in a smiling sea of ​​former teammates wearing Avalanche maroon and steel blue.

“Unbelievably proud,” Johnson said of the banner representing his first Cup title. “He’ll be there for a while after I’m gone. One day maybe they can bring their grandkids or their kids if they don’t believe dad was playing. It’s also a cool way to turn the page and focus on this season and my new team.”

That was just the start of a strange first week for the Blackhawks.

After dropping a 5-2 game at Colorado, Chicago returned to action Thursday against Vegas — dropping that 1-0 contest on a 27-save effort from Golden Knights backstop Logan Thompson.

Saturday’s game will become one of the most terrifying scenarios in the NHL – three road games in four nights.

Captain Jonathan Toews and Max Domi found the back of the net against Colorado. Goalie Petr Mrazek started in Denver and stopped 30 of 35 shots; Alex Stalock allowed the only goal in the Vegas loss on 37 shots.

Chicago announced Friday that it has activated forward Jason Dickinson and assigned forward Buddy Robinson to Rockford of the American Hockey League.

After falling in two games to Nashville in Prague, Czech Republic, San Jose hosts Carolina in its North American home opener on Friday. The Sharks appeared headed for overtime and the first point, but the Hurricanes’ Sebastian Aho converted the game-winner off the left slide with 1:58 left for a 2-1 win.

In a rare NHL battle between brothers, San Jose’s Evgeny Svechnikov beat out brother Andrei, who has become a dynamic right wing in his fifth season with the Hurricanes.

Playing in his first campaign with the Pacific Division club, Evgeniy Svechnikov scored the only goal of the first period with a long shot past Carolina goaltender Antti Raanta. Defenseman Calvin de Haan partially deflected the puck from the shot and tricked the Finnish defender.

“It was a very special moment for me and my brother and my mom and dad,” said Yevgeny Svechnikov, who hugged his younger sibling at center ice during warmups. “We appreciate every time we’re on the ice together.”

Jaycob Megna and Erik Karlsson provided assists in the score, while James Reimer made 33 saves. However, the Sharks lost for the third time in regulation in their first three games of the season.

Last season, San Jose went 2-0-1 against Chicago, with the only setback coming in a 5-4 shootout loss at home on April 14.