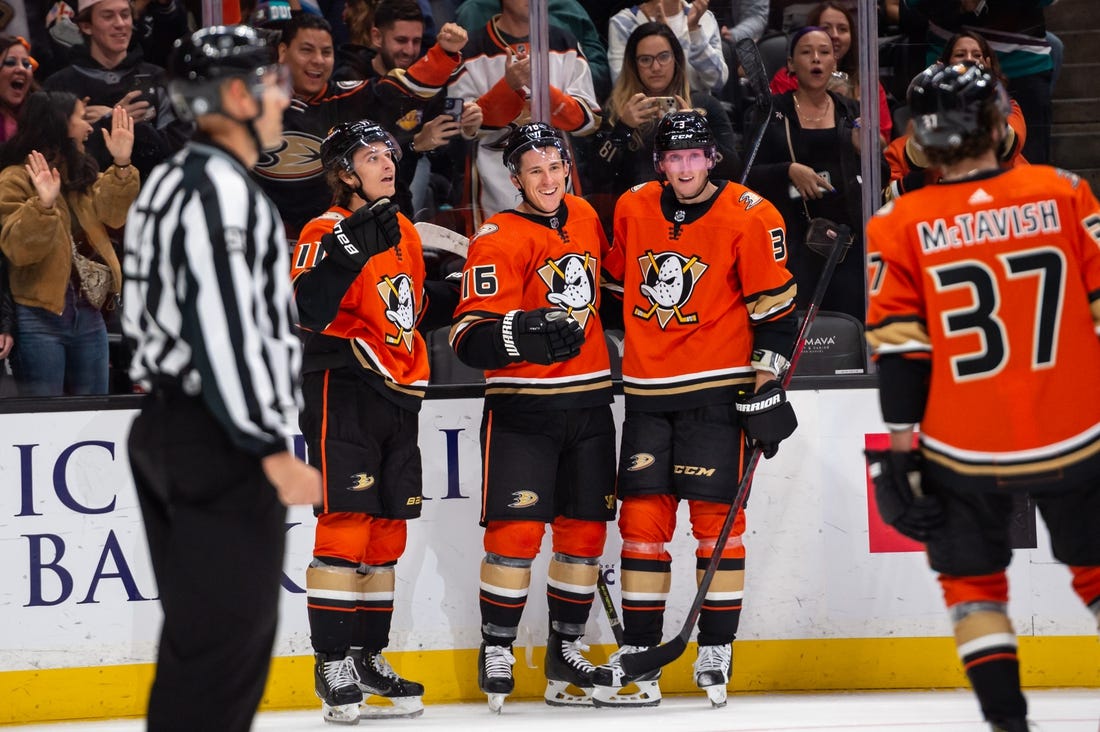 Ryan Strome has already made a positive impact with his new team, and the 29-year-old center should find plenty of motivation when the Anaheim Ducks open a five-game road trip against the New York Islanders on Saturday night.

Strome was selected fifth overall by the Islanders in the 2011 NHL Entry Draft.

New York traded him six years later for Jordan Eberle, now a member of the Seattle Kraken, who lost 5-4 to the Ducks in overtime on Wednesday night.

Strome has spent the past 3 1/2 seasons playing for the New York Rangers, who the Ducks visit on Monday.

The Ontario, Canada native signed a five-year, $25 million deal with the Ducks in July and wasted no time demonstrating his worth, adding a goal and two assists in a season-opening win against the Kraken.

Strome scored his first goal of the season 51 seconds into the game, winning the puck on a check and quickly passing it to rookie Mason McTavish. He then crossed to Troy Terry for the goal.

After the Kraken scored three straight goals with the man advantage, Strome scored a game-tying goal of his own late in the second period. That cut the deficit to 3-2 and gave Anaheim a big boost in the second intermission.

“We can definitely build off of (the season opener), an exciting win for us as a team to take the next step,” Strome said. “Winning a game like this early is a good feeling, getting that winning atmosphere, especially now when you’re going on a tough road. We took care of the first one and we just have to get better every day.”

The Islanders open the season with four consecutive home games. They lost Thursday’s season opener 3-1 to the Florida Panthers.

New York outscored the Panthers, outscored them, got significantly more faceoffs and held Florida scoreless on all five of its power plays, but still went scoreless in the debut for coach Lane Lambert, who replaced Barry Trotz in the offseason.

“We have to regroup here,” Islanders forward Casey Cizikas said. “Take the things we did well (Thursday) and take that into the next Saturday.”

The Islanders will likely return with Ilya Sorokin in goal. He stopped 26 of 28 shots against the Panthers.

Sorokin also won his only two career starts against the Ducks last season, including one via shutout.

He made 34 saves in a 4-0 win against Anaheim on Feb. 27, the fifth of seven shutouts for the 27-year-old Russian last season.

The Ducks will likely return with John Gibson in goal. Against the Kraken on Wednesday, he made 44 saves and provided a big assist on the overtime goal.

Gibson is 4-1-1 in his career against the Islanders with a .925 save percentage and 2.38 goals against average.

The Ducks hope to add to their offense with another productive night from their playmaking unit, which was 2 of 3 against Seattle.

Terry, who also scored the game-winning goal against the Kraken, said the power play can help fill a stagnant offense early in the season.

“You need your power play,” he said. “Strong play can keep you in these early runs until your 5v5 game catches up.”