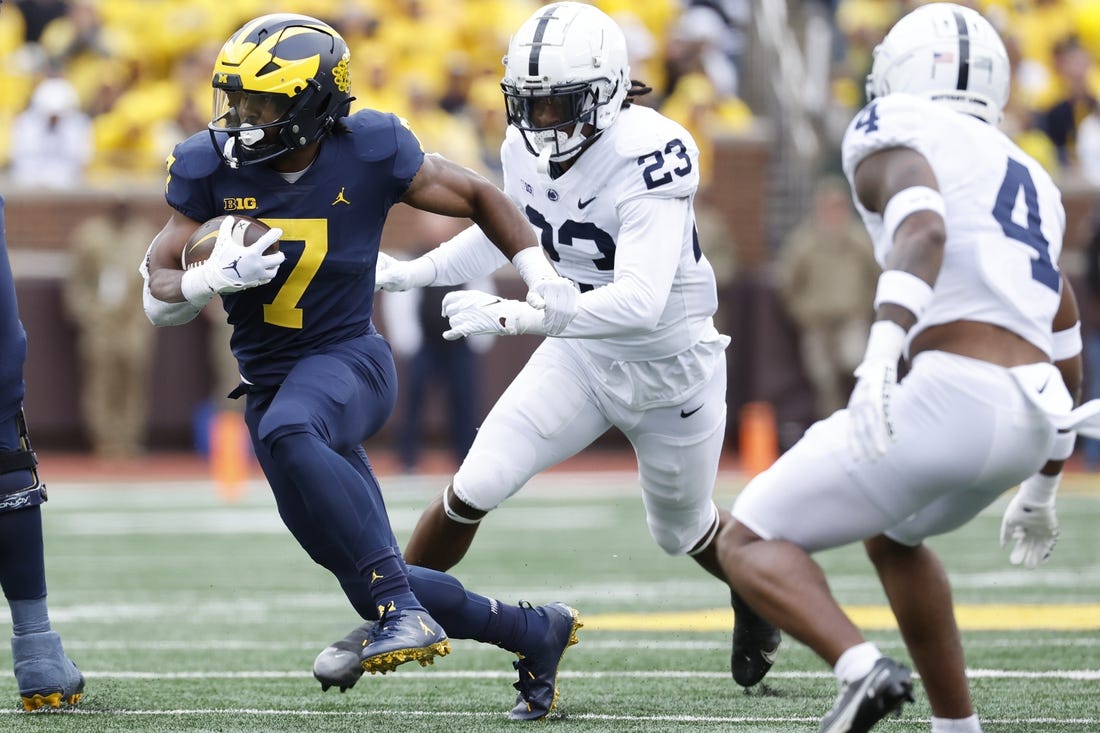 Donovan Edwards and Blake Corum combined for 339 yards and four touchdowns while the no. 5 Michigan topped No. 10 Penn State 41-17 in a Big Ten Conference matchup on Saturday in Ann Arbor, Michigan.

Edwards had a career-high 173 rushing yards on 16 carries and two touchdowns for Michigan (7-0, 4-0). Corum had 166 yards on 28 carries and two more scores as the Wolverines rushed for 418 yards. Michigan’s Jake Moody made all four of his field goal attempts.

The Wolverines led 16-14 at halftime.

Michigan outscored Penn State 126-9 in the first quarter, but had to settle for two field goals. The Wolverines’ first drive was 11 plays and 64 yards. Moody kicked from 29 yards for a 3-0 lead.

The Wolverines’ next possession included a 13-play, 77-yard drive, but they were stopped inside Penn State’s 10. Moody converted a 24-yard field goal.

Michigan capped another long drive with its first touchdown with 8:29 left in the first half. Corum plunged in from 1 yard out to cap a 13-play, 70-yard drive.

Clifford rushed 62 yards after faking a handoff to give Penn State the momentum on its next possession. Kaytron Allen scored from 1 yard on fourth down to answer Michigan’s touchdown.

The Nittany Lions defense then made its presence known. Demeioun Robinson beat JJ McCarthy’s attempted pass. Linebacker Curtis Jacobs intercepted it and raced 47 yards for a score and a 14-13 lead.

Corum showed his burst on a 61-yard run midway through the third quarter to give the Wolverines a 31-17 lead.

Moody’s 37-yard field goal with 11:03 left it a 17-point game. Edwards scored on a 3-yard run with five minutes remaining.