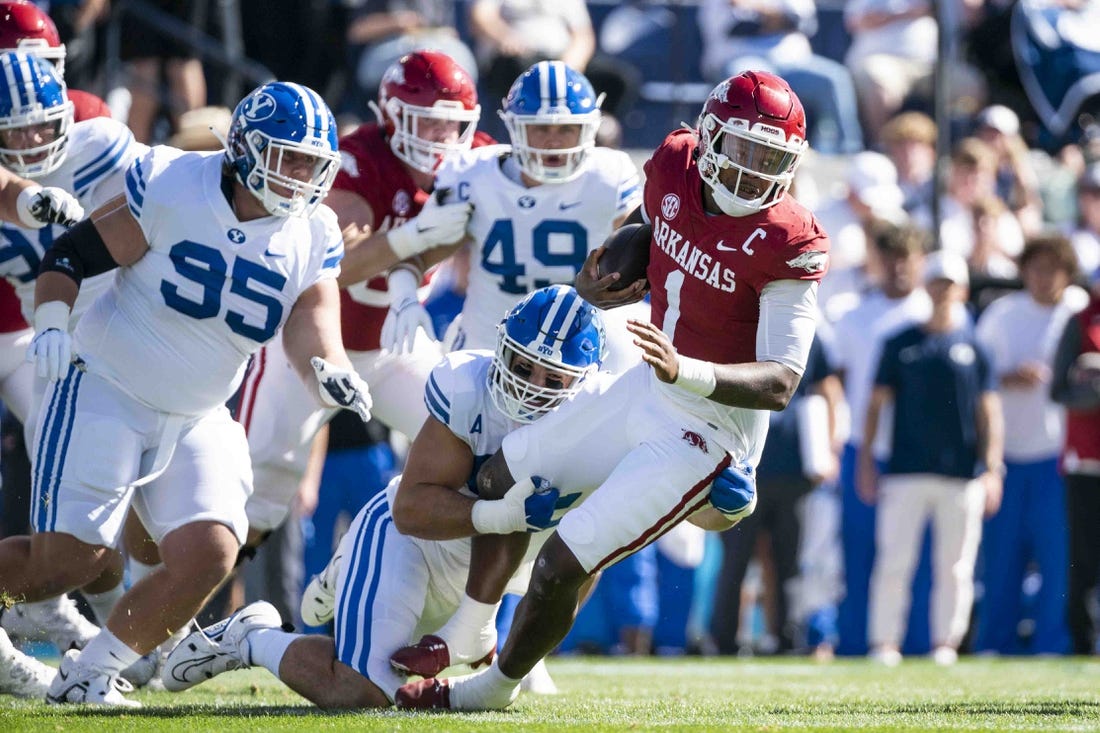 KJ Jefferson threw for a career-high five touchdowns as Arkansas pulled away from BYU in the second half to win 52-35 in a shootout Saturday afternoon in Provo, Utah, in the first meeting between the programs.

The game continued in the first half before the Razorbacks scored 17 straight points to take a 31-21 lead into the break. BYU (4-3) would never get closer than three points the rest of the way.

Raheim Sanders ran for 175 yards and two touchdowns, one of which was a 64-yarder, to lead a potent Arkansas offense that rolled up 277 yards.

Jaren Hall led the Cougars with 356 passing yards and three touchdowns, and Puka Nacua hauled in eight passes for 141 yards and a TD and ran for two more scores. Kody Epps had 125 yards and another TD reception for BYU, which has dropped two straight games.

The Cougars opened the scoring with Hall’s 4-yard touchdown pass to Isaac Rex with 5:39 to play in the first quarter. Arkansas answered three minutes later and tied the game when Sanders made a 15-yard score.

BYU used back-to-back pass interference penalties on the Razorbacks to set the stage for a 21-yard TD pass from Hall to Epps with 1:11 left in the first quarter.

Arkansas took the lead on a 6-yard touchdown pass from Jefferson to Trey Knox early in the second quarter. But the lead was short-lived as Nacua’s 5-yard TD run gave BYU a 21-14 lead with 9:48 to play in the second.

The rest of the half belonged to the Razorbacks.

BYU got back to within three points on Nacua’s 3-yard run on the Cougars’ first drive of the third quarter. Arkansas responded immediately with a 39-yard Jefferson TD pass to Landers.

Natcua hauled in a 33-yarder from Hall with 5:11 to play in the third. The Razorbacks pulled away with a 5-yard TD pass from Jefferson to Landers and Sanders’ long touchdown run.