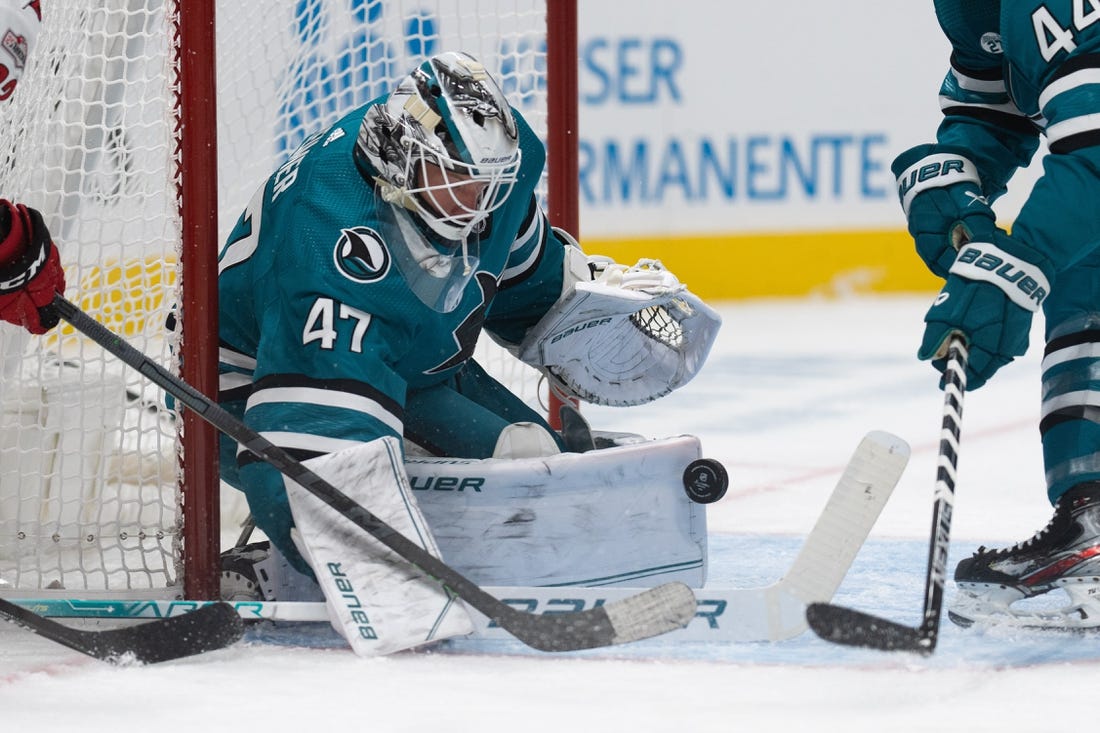 Sebastian Aho scored the tiebreaker with 1:58 left in the game and the Carolina Hurricanes rallied for a 2-1 victory over the host San Jose Sharks on Friday night.

Perfectly positioned in front of the net, Aho deflected the puck from Brett Pesce toward the goal and past Sharks goaltender James Reimer, who made a strong 33-save performance.

Martin Necas scored for his second straight game and Antti Raanta stopped 18 shots as the Hurricanes, who beat Columbus 4-1 to open the season on Wednesday, slipped to 0-4-2 at San Jose.

Evgeny Svechnikov scored for San Jose, which scored just four goals while losing its first three games of the season. The Sharks, who went 0-for-5 on the power play, were swept by Nashville in two games of the NHL Global Series in Prague last week.

In his first season with San Jose and coming off a seven-goal streak with Winnipeg a season ago, Svechnikov opened the scoring with just 2:12 left in the first period. Crossing the upper circle, he threw the puck toward the net, where it bounced off the stick of Carolina defenseman Calvin de Haan, then seemed to handcuff Raanti and slide over the goal line.

Carolina, however, had its first 11 shots on goal in the second period – and ended the middle frame with a 17-4 advantage. Reimer made a key save on Aho after a three-on-two, and Pesce’s save in the second kept San Jose in front.

However, the Hurricanes finally tied the contest with 23 seconds left in the second. Svečnikov’s brother, Carolina forward Andrej Svečnikov, took the puck from San Jose’s Kevin Labanc. He then found Necas, who broke through and slipped the puck through Reimer’s legs.

Norris Trophy defenseman Brent Burns, who played the previous 11 seasons with the Sharks before agreeing to a trade to Carolina over the summer, was honored with a video before Friday night’s contest. Burns scored two shots on goal in just over 23 minutes on the ice.