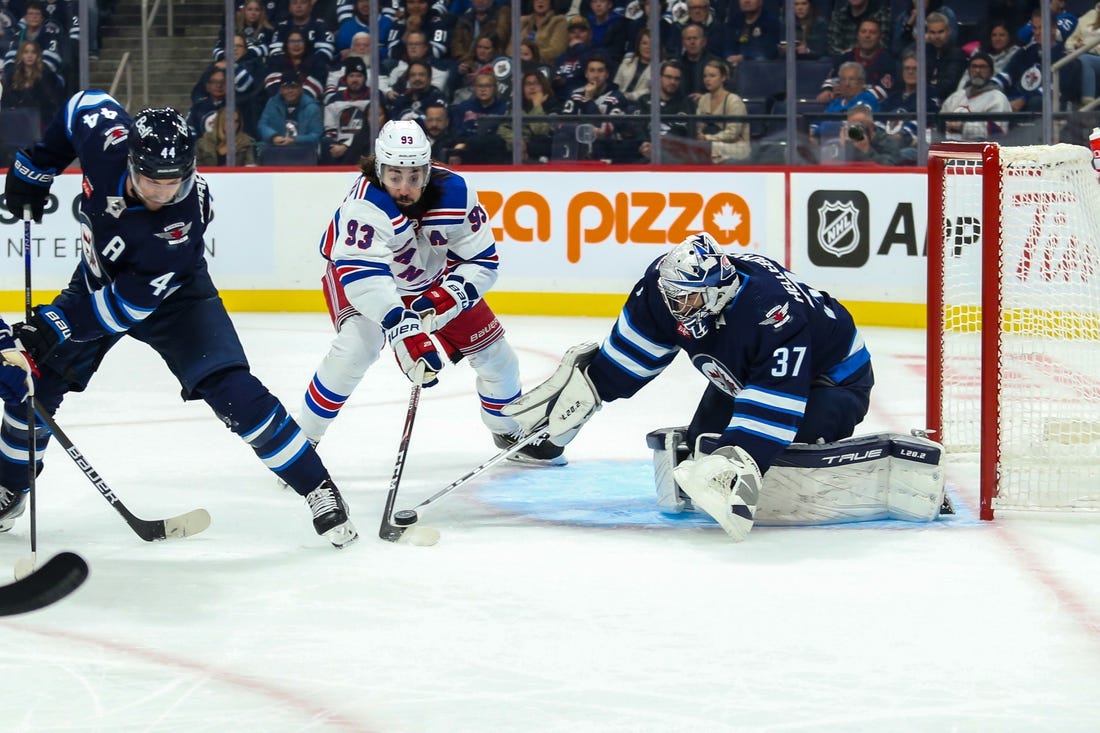 Connor Hellebuyck made 40 saves, Sam Gagner scored at 15:35 of the third period and the Winnipeg Jets beat the New York Rangers 4-1 on Friday night.

The Jets are without new coach Rick Bowness, who has tested positive for COVID-19. Assistant coach Scott Arniel is coaching in Bowness’ absence.

Dryden Hunt scored a goal and Jaroslav Halak made 30 saves in his debut for the Rangers, who were playing for the second straight game. Artemi Panarin scored his fifth assist. New York won the first two games.

David Gustafsson got to a loose puck behind the Rangers net and fed it to Saku Maenalanen, who one-timed across the slot to Gagner. Halak made the first save, but Gagner knocked in his rebound to make it 2-1.

New York’s hopes for a late goal were dashed when Jacob Trouba shot the puck over the glass in the defensive zone, earning a delay of game penalty with 2:34 left.

Scheifele then secured a power-play goal with 1:37 to play and Kyle Connor scored into an empty net with 20 seconds remaining.

The Jets took a 1-0 lead at 10:29 of the first period when Ehlers got to a loose puck behind the net and crossed it to Scheifele, who beat Halak off the bench.

New York outscored Winnipeg 21-7 in the second period, but was unable to tie the game. Hellebuyck robbed Chris Kreider at the end of a Rangers power play to preserve the lead.

But the Rangers tied it 1-1 at 3:55 of the third period when Vincent Trocheck slid down the slot before turning and going across the crease to Hunt, who fired a shot over Hellebuyck’s shoulder.

Bowness was hired in July to replace Dave Lowry, who went 26-22-6 in 54 games as interim coach after Paul Maurice resigned on Dec. 17.