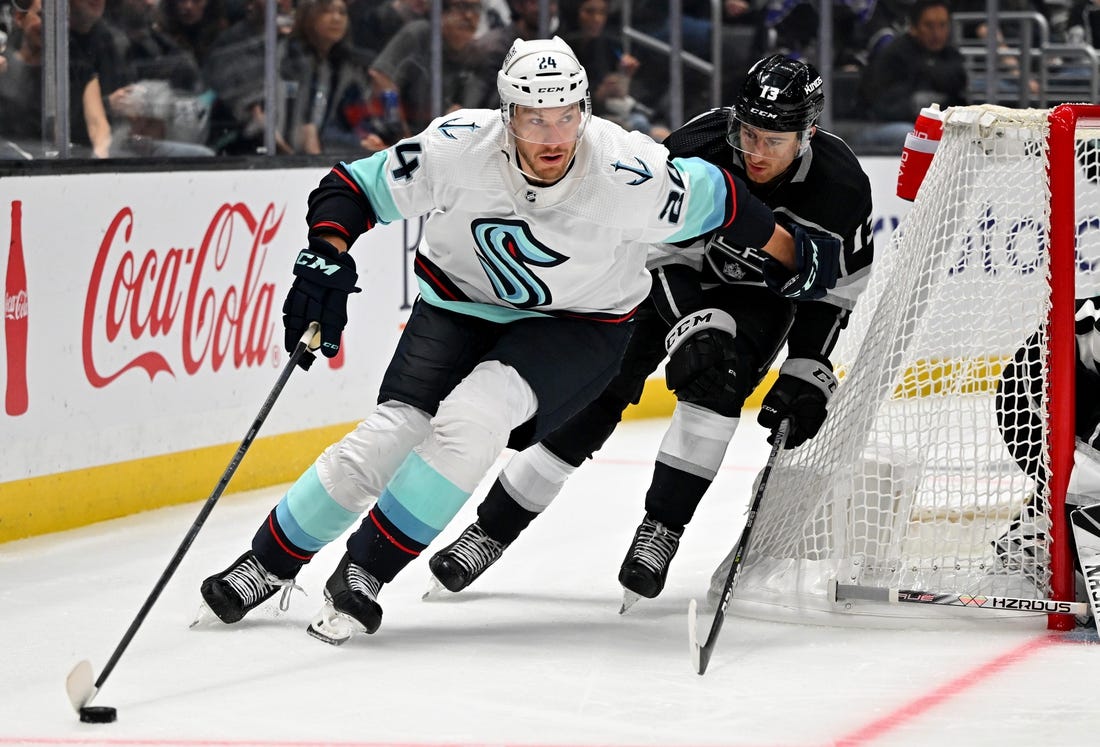 The Seattle Kraken have, at the very least, shown more adaptability than they had during the expansion season.

After blowing a two-goal lead in the third period of their 2022-23 NHL opener in a 5-4 overtime loss on Wednesday in Anaheim, the Kraken responded with a 4-1 victory on Thursday in Los Angeles that franchise record 44 hits.

The Kraken will return to Seattle for their Saturday night matchup against the Vegas Golden Knights.

“We played hard for 60 minutes,” Kraken coach Dave Hakstol said. “In every way we were better with the puck, we were smarter and we did a lot of the areas we wanted to address. “But the biggest thing is that we just played together as a group.”

The Kraken got goals from Jaden Schwartz, Brandon Tanev, Alex Wennberg and an empty netter from Adam Larsson.

Rookie Matty Beniers, the No. 2 overall pick in the 2021 draft who played in 10 games at the end of last season, had a goal disallowed by a high stick. But he had an assist that led to points in 11 of his first 12 games. The only other teenagers in league history to accomplish that feat are Joe Sakic and Jonathan Toews.

“(The Kings) play a tough system and a hard trap to break. But I think that when the simplicity of the game is puck-in, pre-checking and physical activity makes it easier,” said Tanev. “I think when you’re out there with guys who understand the way we have to play, it makes the game easier and you’re just reading each other and communicating and trying to make things easier.”

Schwartz said the Kraken “learned a little bit” from the lead against the Ducks.

“We just had a better mindset, we touched on a few things before we went out. We just focused on going north with the puck a little bit better and not sitting back. We just continued to press them,” Schwartz said. “We did a lot of good things. In six periods of hockey, we played probably 5 1/2 good periods. So a lot to build on.”

The Golden Knights won their first two games under new coach Bruce Cassidy, got a goal by Mark Stone with 26 seconds left in a 4-3 decision at Los Angeles in Tuesday’s opener, then beat visiting Chicago 1-0 on Thursday as Paul Cotter. scored a goal and Logan Thompson made 27 saves.

“It’s big when you can win games like that, especially early in the season, to get points and continue to build off of that,” said Thompson, who posted his second shutout in 22 career NHL appearances.

It was Cotter’s third goal in nine career NHL games. There was a two-on-one break with Zach Whitecloud midway through the second period, beating Blackhawks goaltender Alex Stalock on the short side from the right circle for a faceoff.

“I just shot him as hard as I could and the big man up there took care of the rest,” Cotter said. “At that moment the game is 0-0. We need shots. In a game like that, it’s a strange goal to go in.”